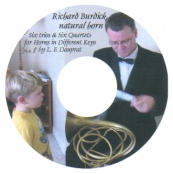 About the horn:
The horn used is an Austro-bohemian horn with terminal crooks made around 1840. Tuned at A: 430 Hertz.
About the music:
The description of the horn from Albrechtsberger’s (1736-1809) Harmony books gives us a chart of the major triad in C and even avoids the common 9th overtone a normal open tone (D). And he goes on to say:
” Semitones are made by the hand, in the bell of the horn and should therefore be introduced with discretion . . . Rapid chromatic passages display a great degree of technical ability, and may excite wonder but little else. A horn should sing, its most beautiful and magical power is thus perceived. Its notes should develop themselves gradually like those of a human voice in a real portamento di voce of delicate shades; these tones will appear the interpretation of an overflowing spirit – the articulated throbs of a sensitive heart, and will conjure up unbidden tears”
Albrechtsberger (Beethoven’s teacher) recommended melodies of a simple nature and to avoid chromatics. In contrast and not too many years later Dauprat, under the master tutelage of Reicha, wrote music of incredibly complex nature for instruments in different keys, as presented here.
Horn always reads in the key of C, but the length of the instrument varied from Bb basso to C alto. C alto parts sounded as written, all other keys were written higher than sounding, with the extreme low Bb horn sounding down a Major ninth. In these works contrasting and conflicting keys were used and in a masterful way. For Example; the last chord of the first trio is a concert A minor triad. The Low C horn plays a written E sounding concert E. The E horn plays a written Eb sounding concert G. And the G horn plays a written E sounding concert B.The amount of transposing and then relating the music to what is possible on the valveless horn, is outstandingly difficult.
-- These works are technical and music masterpieces. --
One of Richard’s favorite moments is when two horns pitched a minor third apart both play repeated eighth notes on a written Bb’s: a uniformity of timber resulting from the use of the 7th overtone, in two different keys.
Among the difficulties presented to the horn player are incredibly fast passages, low Ab’s, high A’s and lots of chromatics. The chromatics written for a low pitched (like C or D) instrument are especially hard and often go unnoticed below Dauprat’s beautiful melodies.
About the recording and set up:
These are multi track recordings. Mr. Burdick is performing all the parts. The recording is done on an iMac G5 with the program Digital Performer 4.5 and a Presonus Firestation USB preamp and USB interface with two Mogami MXV V69 tube microphones.
Reverb was added to emulate a large concert hall and a limiter was used to eliminate most of the background hiss. No other sound alterations were made.
The project was begun in Richard’s studio at the Music conservatory, a part of the University of Regina, Saskatchewan in February 2005. After recording all the trios it was determined this studio had too much background noise. The recording was redone entirely in a “sound proof” room in the basement of Mr. Burdick’s apartment. The last day of recording was November 10th 2005 with the complete performance of trio number one done in about an hour and a half.